If you’re new to the editing bay, you may not be familiar with all the techniques and cuts available to you — but you’ve likely seen, watched, and experienced them both. These scene transitions deal with the interaction between sound and visuals; they’re also a useful editing tool to keep in your back pocket.

Here’s everything you need to know about film cuts, including seven of the most popular cuts in the industry. Cozy on up to J-cuts and L-cuts, cutaways and cross cuts for this lesson on how (and when) to incorporate them in your videos.

How do you define a cut?

In film and video, a cut is defined by when one clip ends and another one begins. For example, say you have a wide shot clip of a horse running as well as a close up clip of a woman’s eyes watching. The “cut” would occur when the first shot ends and is followed by the second shot.

That’s just a basic example, though. There are a wide range of cut types and examples which can make recognizing a cut more complicated; however, at its most base level, a cut will always be defined as the separation of one clip from another.

You know video. Time to learn the rest.

So…what are the types of film cuts?

A hard cut is a cut which is done outside of the natural flow of a scene or a film. It is meant to startle the audience and is done for cinematic effect.

A match cut is a cut which visually connects the new shot with the one previous. This can be achieved by “matching” the movements of the previous shot so that the transition is seamless.

A standard cut is your basic cut between two shots in film and video.

Also called parallel editing, a cross cut is a cut which crosses time, space and scenes to let the audience know that two (or more) events are happening at the same time.

A cutaway cut is a thematic device where a filmmaker (or editor) chooses to cut away from a scene to show a different shot for cinematic purposes.

What is a jump cut, you ask? Well, it’s an abrupt transition, typically in a sequential clip that makes the subject appear to jump from one spot to the other, without continuity.

This can happen when two sequential shots of the same subject in the same scene are cut together from camera positions that vary only slightly. Jump cuts also occur when cutting between two sections of footage shot from the same exact camera angle, for example in an interview.

Jump cuts can be jarring. They draw attention to the process of filmmaking and editing, which can take the audience out of the story, so traditionally they are viewed as something to be covered up. Because jump cuts draw attention to what otherwise goes unnoticed, they can be used in strategic and creative ways.

This is just a handful of the types of film cuts out there. Master these seven, then advance to expert mode.

How to avoid jump cuts

Typically when crafting a scene, jump cuts are avoided by varying camera angles and shot composition. Making sure to cut between close-ups, medium, and wide shots is an easy way to avoid jump cuts. Also, when cutting between two similarly composed shots, a rule of thumb is that the camera position should move at least 30 degrees between the two shots.

When you need to cover up jump cuts in an interview, you can do so with supplemental footage, such as clips from a different camera angle, or B-roll. If you have the resources, it’s helpful to shoot an interview from two angles, so that when you need to splice together different parts of the dialogue to tell a story, all you need to do is cut to the other angle and your subject won’t appear to jump on the screen.

If you don’t have another camera, shoot hand gestures and ambiance shots before or after the interview and cut to those. Similarly, another great option is to shoot B-roll and layer those clips over the jump cuts.

How to embrace jump cuts

Before you go casting the jump cut as the villain in your next flick, consider its advantages. Jump cuts can be used to show the passing of time, or to speed up a sequence. Jump cuts can also be used stylistically, creating a mood or setting a certain creative pace.

Jump cuts can also be used for a comedic effect. When you cut up a talking head interview or monologue they can emphasize confusion or inarticulateness. You’ll see this technique is commonly used in vlogs-style content.

Okay, then what is a J-cut?

Spoiler alert: a jump cut and a J-cut are two different things. We know — confusing, right?

Let’s break down what exactly a J-cut is.

As mentioned above in our basic definitions, J-cuts and L-cuts have to do with audio. The visual cut itself should remain the same, however audio is either brought in early from the next clip (a J-cut) or the audio from the previous clips stays under the new clip (a L-cut).

While jump cuts are meant to startle the audience or speed up time for cinematic effect, J-cuts and L-cuts are meant to better connect audiences with what’s going on in the film. These split edit cuts as they’re called can be done to give audiences an auditory glimpse into the next scene, or better remind them of the scene they just left.

What’s the difference between a J-cut and an L-cut?

J-cuts and L-cuts are similar, but different. By definition, J-cuts are scene transitions where the audio of the next scene precedes the picture change. In an L-cut, the audio carries over from the previous scene into the following one, despite visual changes. 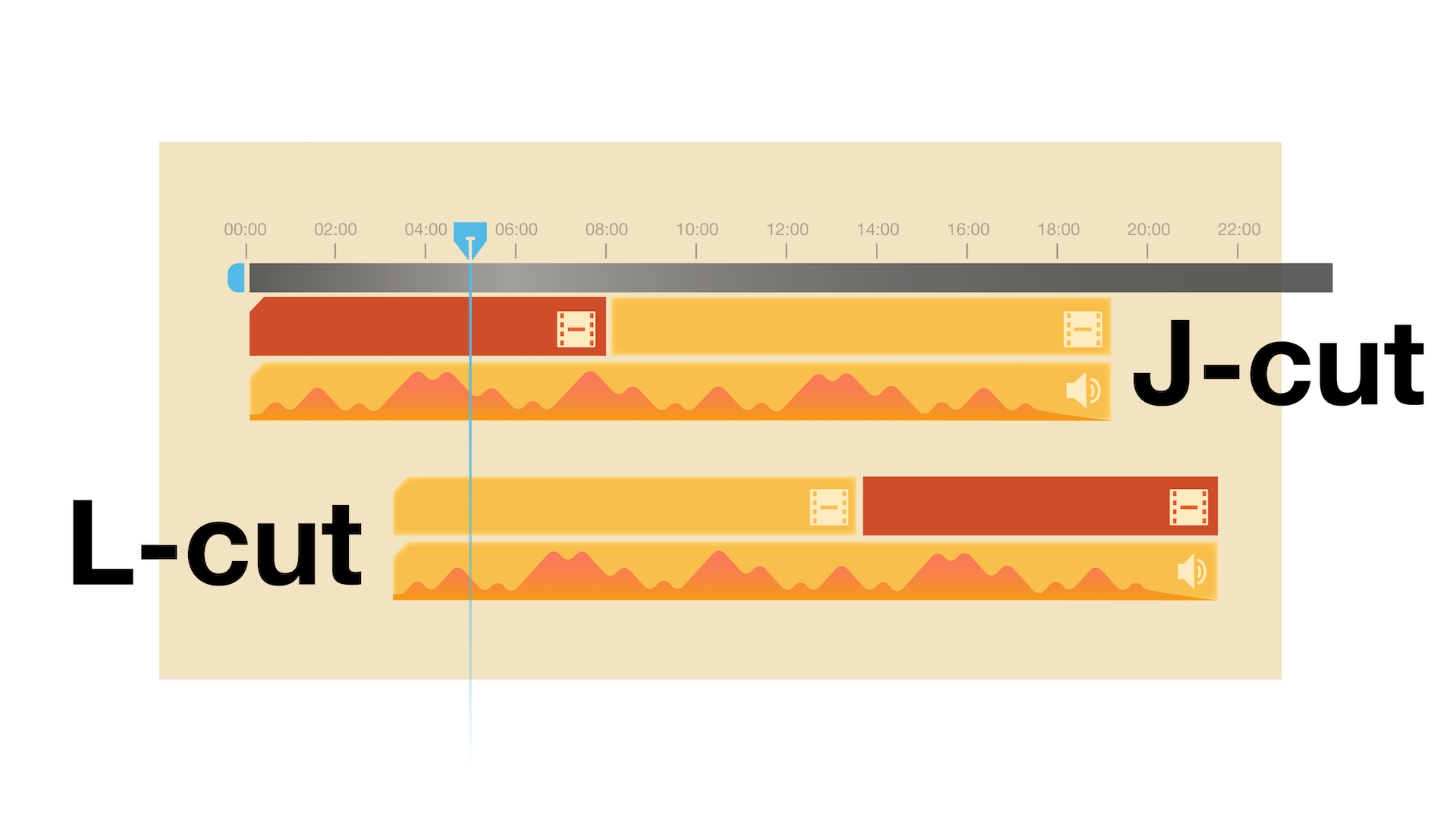 What cuts should I use? J-cut vs L-cuts

Truth be told, J-cuts and L-cuts are often better when they’re used together. Does your video include a bunch of visual information, conveyed through quick cuts? Do you have a dialogue-heavy scene? Using both cuts can create a natural flow, instilling a sense of order in inherently jumpy clips.

For dialogue scenes, instead of cutting back and forth each time someone speaks — known colloquially as “ping-pong” — break up the transition styles. Use L-cuts to show the reaction of the person who is listening, and J-cuts can bring a new voice into the mix.

Use J-cuts to create a sense of intrigue about what’s coming next in your video. Is it going to rain in your next scene? Bring in that familiar sound early to pique the interest of your viewers.

A good example of a J-cut is Patagonia’s brand film “Life of Pie” (shown above). Before any on-screen visuals appear, you hear dialogue that introduces an unconventional interview in the film’s opening sequence.

L-cuts are a voiceover’s best friend. They’re also great for dialogue scenes where you want to cut to the reactions of the person who is listening (more on that later).

Notice the L-cut in the initial scenes of Eugen Merher’s “Dark Red.” As the protagonist speaks into an audio recorder, you’re quickly pulled into his daily life as the voiceover carries over.

Oh, you thought these cuts were just for the movies? Think again. Even new-to-video marketers can use j-cuts and l-cuts in advertising videos for social media. Here are a few ideas for ways to use cuts in all types of videos.

Hopefully this primer on film cuts has given you a good basic understanding of how editing works for most film and video projects.

At the end of the day, the best cuts for your projects will be the ones which help you tell your story in the most direct, and creative, way possible. Mix and match your cuts to finesse your storyline, and when in doubt, experiment.